Today is Tell a Story Day. There are lots of ways to tell stories. I enjoy blogging for myself and others just as much as I enjoy creating fiction. But today, to celebrate this holiday, I want to share a short story. 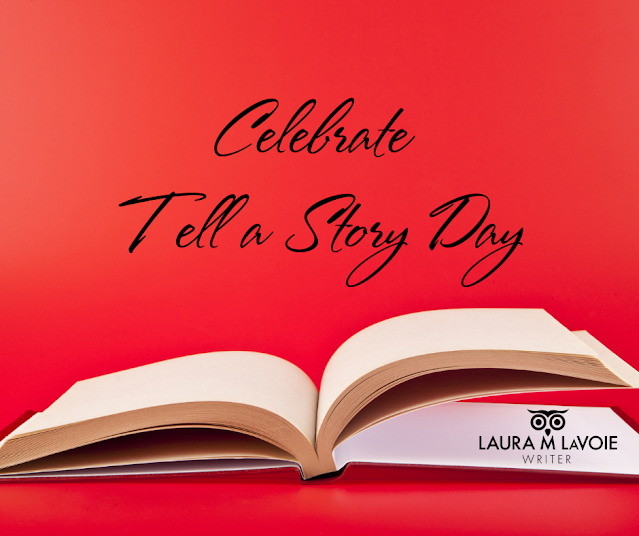 I love mythology. I also love retellings of mythology and interesting takes on the subject. Persephone, the daughter of Demeter, had many suitors before she was kidnapped by Hades, god of the underworld. One suitor was Hermes, the messenger of the gods. I wrote this story a few years ago and recently rediscovered it.

The light knock on the bedroom door was followed by "Mail Call!" in the playfully musical voice that made her giddy. Persephone swept across her bedroom in her slippers and silk robe to open the door.  Her brother, Hermes, met her at the door. His roguish grin spread across his face affecting her smile as well.

She threw her arms around his neck as sisters do.  "Come in!" she said. "I was just going to have some tea."

"Sounds delightful." Hermes stepped into her lush sitting room and sat down in the cushioned chair that Persephone pointed to. She sat across from him and brushed her auburn hair away from her face before reaching for the teapot.

"Yes. Both please".  Hermes took off his winged cap and set it on the table.  His blond hair was a little too long. His eyes twinkled, but it was impossible to tell what color they were. His eyes were the color of infinity.  As she fixed his tea, he shuffled the letters in his hands. "I have messages from Olympos. I was here delivering a soul, so I figured I'd bring your mail too.  There is a letter from your mom, and one from Aphrodite...oh and here is one from Zeus himself!"

"Another proclamation of where I get to spend my time, I assume."  Persephone set the teacup in front of Hermes and then poured a serving for herself.

"You don't sound bitter at all, sister," Hermes said.

"You try living this way.  Part of the year here, away from the sunlight. Part of the year there but away from my husband. It is a no-win proposition. I only get half of the things I love any time of the year.  It is a little frustrating.  You don't have that problem - you get to go anywhere."

Hermes' face got serious. "Sure, I get to go anywhere, but I've missed out on a lot of things too. It isn't all Unicorns and Cupcakes where I am either."

Persephone blew lightly on her tea before taking a sip.  "What could be all that bad, messenger?"

"Well, for one thing...I don't have you," he said. He reached over and placed his hand on hers, and she could feel his pulse racing through his veins.  She quickly pulled her hand out from under his.

"Brother, I don't think that is appropriate." She scolded.

The smile on his perfect lips was gone. "Why not?" He asked. "Your husband is your uncle - on both sides. Zeus and Demeter are brother and sister. In our world, these things do not matter at all."

"That's not why." Persephone stood and walked toward a painting of a window on her wall. The acrylic sun rising over the perfect trees never gave off warmth. Her back was to Hermes as he sat at her table and looked at her longingly.  "My life is entirely too complicated," she said finally.

"Complicated?  What is so complicated? In the spring, you come to Olympos; in the fall, you come here with your husband.  There is a beautiful simplicity to your world. It is necessary for me to pop in and out of all places at all times.  What does Hades need of a queen as he broods over shades on his stone throne in the underworld? Imagine if I had a companion to accompany me?"  Hermes stood from the table, her back still turned, and crossed the floor, embracing her from behind. For just a moment, Persephone considered melting into the lean and sinuous arms. She thought briefly of what her life could have been like as the companion to the messenger.  And he whispered in her ear, his breath warm on her skin, "I asked for your hand as well. And I was denied."

Persephone pushed against his arms, "Let go of me.  None of my time is my own time to begin with; I will not let you take me prisoner as well."  She twisted around so she could get better leverage to escape his hold. She placed her palms on his chest to shove him away, but he held firm, taking this moment to bring his lips to hers.  The soft taste of pomegranate flooded his brain as he became engulfed in Persephone's magic. For just a moment, Persephone's body remained ridged against him but quickly eased. She felt herself giving in to Hermes's passion.  Felt the urgency in his body that she hadn't felt in a long time. She loved her husband, but excitement ebbed and flowed throughout eternity.

Hermes' mouth was desperate against hers. He had his share of lovers throughout time. The feel of the voracious Aphrodite and the gentle maid Hecate overwhelmed his brain. But the sense of Persephone's body was new and exciting and suddenly terrifying. He stepped away and looked down at the the floor.

"What is the matter, messenger?" Persephone asked breathlessly - her amber eyes drew his gaze to hers.  "Isn't this what you wanted?"

"It is," he conceded. "But not like this.  Not sneaking behind the back of your husband.  Not after your mother rejected my gifts to marry you. Not knowing you keep Adonis on the side. If you are not meant to be mine exclusively, I will not share you with anyone else."

"You know that is a promise I can't make. And you know you couldn't make it as well."

"I could for you," he said softly.

Persephone reached up and touched his golden hair softly. "Brother.  Our world is not an easy one. My life is barely my own. My time is always accounted for.  If we could escape this existence, I would. But I don't think we could run away and be together if we tried.  Zeus knows. He always knows. Helios would follow us.  There is no place on earth that we would not be found. Believe me, I have considered all the options. It isn't in their plans for us.  We couldn't be sneaky enough. Even you."

"There are times I am more than willing to be sneaky and times I want to throw this all away.  Move to America and live in a tiny house in the mountains.  Where no one will find us."  Hermes reached his hand up to cover Persephone's as she stroked his hair. He looked into her eyes. "But you're right. There is no freedom for us.  Where would the souls go without me? Who would they meet here if not you?"

"I can make us a new pot of tea," Persephone said quietly. "We can chat. We can be like brother and sister, and you can always visit me."

"And we will relive this heartbreak throughout eternity."

"I wouldn't want it any other way."