My Introvert Story: On Feeling Average

I have spent my whole life feeling like I am nothing more than average. I have always been average and I would always be average. There has never been anything exceptional about me. I didn't participate in sports as a kid. I didn't win awards or get top grades. I possessed no discernible talent that set me apart from my peers. Like many young girls, I longed to feel talented or pretty and I would often compare myself to others. I still do. 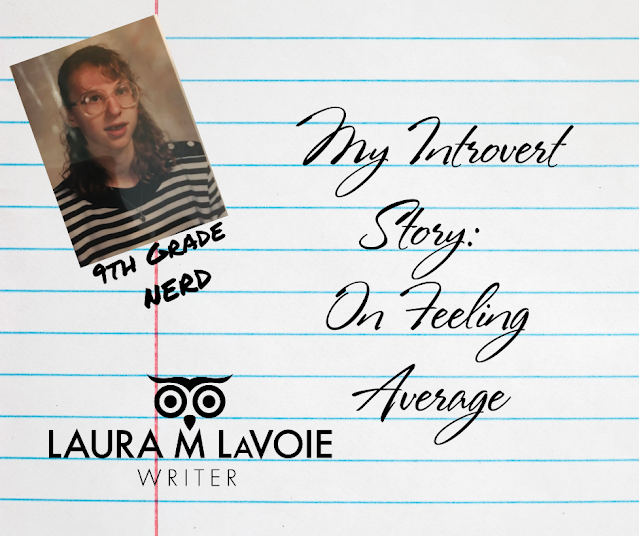 It seems ridiculous to say that I wish my childhood had more drama but sometimes that was how I felt. I grew up in a middle-class household in the suburbs. My father worked and my mom stayed at home. I was the youngest of three with a wide age gap between myself and my oldest sibling. There was nothing unusual about my life or how I lived it. I went to school every day, did just enough to get by, and came home to have a snack, do my chores and my homework, and then just sit around waiting for the next day to come.

I Was a Textbook Nerdy Introvert

When I was a kid, I didn't quite understand that my problem was one of overwhelming averageness. I coped with it in a most unhealthy way. I lied. I made up all kinds of crazy stuff about myself because it was more interesting than the truth. In my pre-teen years, I made up stories about boyfriends who went to other schools. I would include just enough information to make it seem real but hopefully not enough to make people question the truth. I felt like I was too average to be interesting to anyone else. I wasn't even sure my friends found me interesting.

Eventually, I turned that habit into a hobby by writing fiction. Mostly bad fiction with a bad poetry phase in my late teens, like you do. I had to get the lies out of my head and down on paper. My own story was too average to tell. Tales about vampires or magical quests seemed much more exciting.

I gave up lying in high school. It was exhausting to pretend to be something else. I focused more on writing than I did on anything else, including my grades. I sometimes wrote in class rather than doing my classwork. Despite my reputation as a nerd, I wasn't a straight-A student and I wasn't the girl you wanted to cheat from. People did, but they quickly learned this would not provide the outcome they were expecting. I was simply average. I got into college and continued to be average. I graduated and was still just average. I got an average job and did average things.

Being an Introvert is Not a Personality Flaw

I hated what it meant to be average which sometimes made me hate myself. I had always thought I would rise above the average life. When I was a kid living in suburban Detroit, I would imagine living in New York City or London. I told myself that I wouldn't continue to work in a safe job that paid me well but made me miserable. As I became more independent, I would do little things that made it seem like things were less average but they just masked the problem. I traveled and experienced all kinds of awesomeness that made me think that a not-so-average life was possible. I always returned to the same things I was doing before. I told myself that one day I wouldn't be average anymore. But "one day" is not a thing that just happens. You have to make it happen.

The Future is Nerdy

I look back now and know my life isn’t average. Average stopped weighing me down a while ago even though my brain doesn’t always notice it. I chose an unconventional life in many ways but being unconventional doesn't automatically mean "above" average. It does mean that I no longer compromise. Sometimes it means I take a risk and fail. Making safe choices doesn't guarantee that life will turn out exactly as you plan either. I took myself out of my safety zone and jumped without a net. No matter what I do from this moment forward, I may still be an introvert, but I will never be average again.