The Lessons I Learned from the TV Show Crazy Ex-Girlfriend

My friends will all tell you that my obsession with the musical comedy TV show Crazy Ex-Girlfriend may be a little over the top. Even though the show ended in 2019, I still watch it as my “comfort TV” and listen to the soundtrack. There are over 150 songs written by Comedian Rachel Bloom and her collaborators. I recently read Rachel’s memoir I Want To Be Where the Normal People Are and it got me thinking about the way that Crazy Ex-Girlfriend spoke to me. Here are 4 lessons I learned from Crazy Ex-Girlfriend. 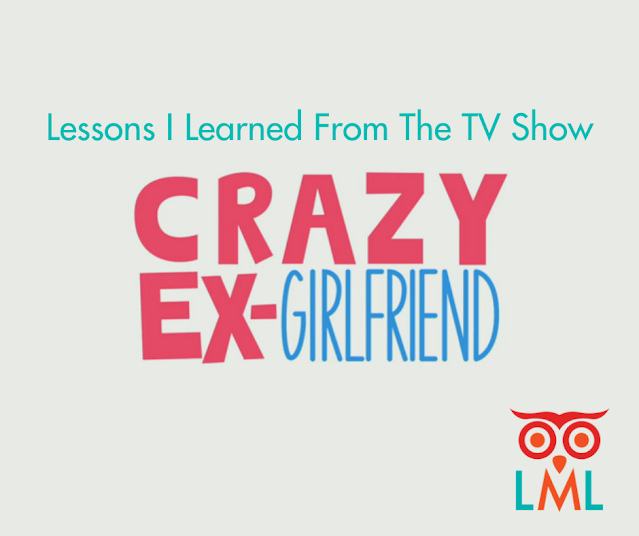 I watch a lot of TV. It’s not unusual for me to find something random on Netflix and put it on while I’m doing other things. But every once in a while, something grabs my attention. That was Crazy Ex-Girlfriend for me. I watched the first two episodes barely paying attention to them. But then, as I had the third episode on in the background, I was suddenly drawn in. The song "Face Your Fears," sung by the amazing Donna Lynne Champlin as new best friend Paula, was laugh out loud hilarious. And while Paula gave the main character Rebecca some very bad advice, the core of it was good. Face your fears, just make smarter choices than Paula.

Don’t Judge a Book by Its Cover

Season 2 introduced a new character named Nathaniel, played by Scott Michael Foster. Nathaniel was the quintessential privileged, rich, white guy. But as the seasons wore on, we learned there were layers to his character. As with anything in life, don’t judge a book by its cover. The shallow perception of anything could just be in the way of discovering a deeper meaning.

Get Help When You Need It

When CXG started, it looked like a story about a woman stalking her ex. And, well, it kind of was. But it also wasn’t at all. It was about the journey of self-actualization that Rebecca needed to be on to find out why she behaved the way she did. And when the comedy show tackled a huge issue like suicide, the message was clear. Don’t avoid help. Get it when you need it, whatever form that takes.

Do What You Love

There’s nothing wrong with taking inspiration from pop culture. Creators of pop culture are inspired in their own lives to make shows, music, books, and movies they believe in.

What’s something that’s influenced you? Tell me in the comments.