If you’re not familiar, National Novel Writing Month is an annual event that encourages writers of all skill levels to push through and create. The challenge is to write 50,000 words of a novel in 30 days. 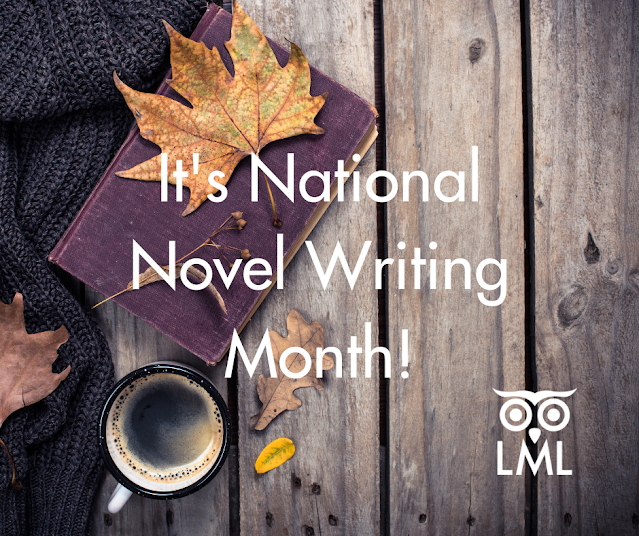 The event starts on November 1st and continues through the end of the month. A few years ago, I did the challenge and met the goal – or “won” as the vernacular of the challenge goes. But it’s not like you’re competing against anyone else and the only prize you get is the satisfaction that you did a difficult thing. I am currently going through my bajillionth revision of that and working on sending our query letters to agents.

This year, I’ve already started a novel. I’m not that far into it, but I am going to use the tools and energy surrounding NaNoWriMo or NaNo for short to continue to work on it. While that could be considered cheating, since it’s only a competition against yourself, what’s the harm?

Are you thinking about doing it, too? It's not to late to start. If so, here are some tips, tricks, and ideas to help get the creative juices flowing.

If you do plan to participate, use the website and the tools available, there. The best tool is simply the word tracker, which helps you see your progress. There is something wonderful about seeing that graphic move up as you get more and more words on the page. But you can also use the website to connect with others and read motivational blog posts throughout the month.

While November gives you a framework, it’s not magic. You have to make yourself write. Have a plan and schedule time every day. 50,000 words in 30 days I only 1,666 words per day. You can do that easily as long as you sit down and type. Use whatever time of day you’re most productive. I tend to be more productive in the morning, but I also use that time to work on client stuff. But in the afternoon, when I’m cashed out, I can also have my laptop with me and write a few hundred words at a time while binge watching The Great British Baking Show or something.

I can’t stress this enough: 1667 words per day is not just possible, its doable. And the contest is basically over when you reach 50,000 words. But a novel is a lot more than that – generally between 65,000 and 80,000. Write as much as you can whenever you sit down at a computer. Don’t just get to 1,667 words and stop. If you’re on a roll, keep typing. You’ll thank yourself later when you have a day you just can’t make the words come out or you are busy with something else. It will also help you flesh out a complete novel that you can finish once the month is over.

The best thing I’ve done to stay focused for NaNo is create accountability. Sometimes, it’s just me and my bestie encouraging each other throughout the month. Other times, I’ve gotten involved in online communities of writers. Before the pandemic, local Nano groups would get together to have Write-Ins, but those will likely be virtual this year. In any case, being accountable will help you write your words every day.

Okay, now on to some of the more creative tricks to help you get to 50,000 words. These may or may not be in the spirit of Nano, but they will help you reach your goals.

What are you writing this November? Let me know in the comments or on social media.