Three years ago I wrote this. I never thought it would turn into something bigger.

I was bursting with the news for almost a week before I could tell anyone outside my close circle of confidants. I knew my friend Cara had nominated me for Childfree Person of the Year but I honestly didn’t think I would win.

Then I got the email from Laura Carroll, author of the Baby Matrix, that I had been selected. So many things ran through my mind. She told me that Karen Malone Wright, my partner in crime for the upcoming NotMomSummit, had been on the selection panel but had to abstain from voting.
But because we always doubt ourselves I began to worry that I was the only person nominated. As it turns out, I wasn’t. Which means people read Cara’s story about me and truly believed I deserved this honor. And for that, I am humbled. And proud at the same time. 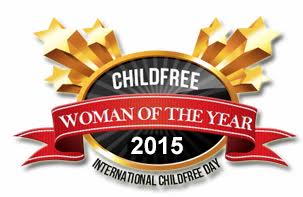 After the announcement was made on International ChildfreeDay I found my social media flooded with congratulations. And the requisite confusion:

“There’s an award for this? How strange.”

So I thought about it. Why is there an award for Childfree Person of the Year?

The recognition occurs on International Childfree Day which doesn’t seem surprising to me. We honor mothers on Mother’s Day, fathers on Father’s Day. There is Grandparent’s Day, Sibling’s Day, and so many more calendar dates where we honor the relationships in our lives. International Childfree Day seems like a natural thing to celebrate. That women and men who choose not to have children should be given a chance to celebrate their choices.

By including an award, though, we do add another layer to it. And to her question I responded that this is specifically about being Childfree by Choice, not childless. That we are a demographic that is often called selfish, shallow, and self-absorbed (to quote the title from NotMom Summit Keynote Speaker Meghan Daum’s book).

This is about breaking that stereotype.

I am honored to be the 2015 Childfree Woman of the Year. I am proud to be an example of a childfree woman who is not selfish or shallow. I try to live my life in a way that is not only fulfilling to me but also helps those around me.

Not every choice is valid for every person. Some people are built for parenthood and some, like me, are not. Let’s not condemn one another for our choices but celebrate all of our differences. Without differences, this would be a boring world indeed.
Labels: award blogging childfree by choice